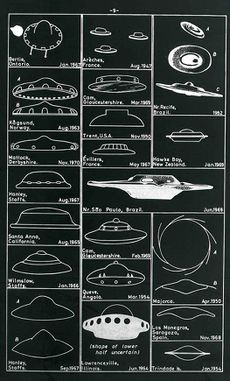 "Ufology differs from normal science in the subject matter. It lies in the realm of the liminal, the paranormal, the supernatural. It is an enchanted area where the rules of the rational world do not apply."

"Ufology is not a science but a process of initiation. One starts with field investigations and ends up studying Arab mystics."

An unidentified flying object (abbreviated UFO, U.F.O.) is the general descriptor for any unusual object (or phenomenon) sighted in the sky that cannot be readily identified by an observer. In the majority of cases, a UFO can be later identified and explained to have been a known phenomenon or more conventional object, such as an aircraft, cloud feature, or planetary body, while the few that cannot be so identified after the fact become the interest of ufologists (and saucerians). A multitude of theories have been offered to explain the origins of unidentified craft, including: extraterrestrial pilots of advanced craft are visiting our world from afar; interdimensional beings penetrating into our phase of reality are here to help (or hinder); demons are deceiving us; space critters live in our atmosphere; and others besides.

In popular media, the term UFO will typically refer to an extraterrestrial spacecraft, as routinely depicted in television and film, which, in turn, has inspired hoaxes and media inspired sighting reports.

This category has the following 9 subcategories, out of 9 total.

The following 4 files are in this category, out of 4 total.