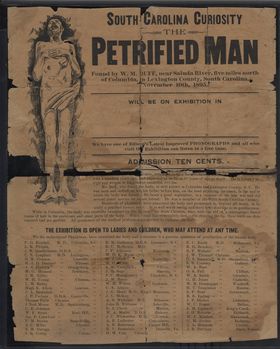 The Saluda River Petrified Man was a cement statue that was exhibited as petrified remains after their alleged discovery by W. M. Buff near the Saluda River, five miles north of Columbia, South Carolina during November 1895. It was described in Buff's advertisements as being 5 ft. 9 in. (1.75 m.) in height with a weight of 313 lbs. (142 kg.), and was proposed to have been British solder who died during the American Revolutionary War (1775-1783). It was exhibited at the first South Carolina State Fair in 1896 and toured throughout the Carolinas until around 1899, at which time one William C. Dreher wrote a regionally-publicised pamphlet, issued through the Berlin Anthropological Society, in which he declared he had studied samples and found the supposed petrified man was "made out of lime and clay silicate, poured into a mould."[D]

In early 1902, it was reported that the statue had re-appeared in Atlanta, Georgia, being held at the local railway depot after having been shipped there from Newborn, South Carolina in September 1901. Again, one year later, in 1903, the Pristine Petrified Phenomenon was reported as having been discovered in Henderson County, North Carolina, and many asserted it was simply the second-go-around of the Saluda River man.