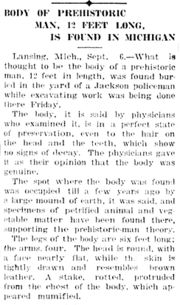 The Jackson Prehistoric Man was a manufactured mummy, described as being twelve feet (3.66m) or twelve-foot-seven (3.84m) in height, with legs six feet (1.83m) in length, feet sixteen inches (40.6cm), and arms four feet (1.22m) in length, with round head, scantly haired, and flat face, the skin resembling brown leather, and a stake through the chest. Initial newspaper reports stated the mummy had been examined by a physician, city health official H. B. Neagle, who considered the find credible but would not verify it as legitimate without further examination, after it had been first unearthed in the back yard garden of police patrolman Orel Nierman (sometimes erroneously called "Oscar" Nierman) at 734 North East Ave. in Jackson, Michigan on Friday, 5 September 1919. Later reports related that an ex-convict named Jimmie Leathers was noted by the locals to have spent time fabricating a large collection of "dummies" during time served at the Michigan State Prison, linking the find to his work, and, further, that a team from the University of Michigan who came to investigate the find, led by one Campbell Bonner, quickly observed that the head of the mummy was wooden and so ended all further inquiry. Local reporter Charles Tibbetts was later credited with having taken the initiative "to expose the hoax," plucking cotton from the body.

The mummy was displayed briefly in a tent at the Jackson County Fair, being removed after only a few days owing to "unfavorable publicity." Nierman, for his part, resigned from the police force the same day. It is unknown what became of the mummy once it had ceased to be an item of media interest.