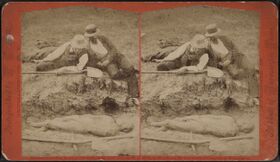 Picture of a Petrified Body, Belonging to a Pre-Historic Race, stereoscopic photo by W. L. Hall (1879)

The Taughannock Giant was an alleged giant petrified man that was reported to have been excavated on 2 July 1879 during the widening of a carriage road on the grounds of the Taughannock House Hotel near the Taughannock Falls in New York, described by newspapers as measuring 7 feet (2.13 m.) in height. It was later discovered to have been a hoax concocted by the hotel's owner, John Thompson, who hired Ira Dean, a local mechanic, to fabricate the statue, which was said to be made of "a thick batter of eggs, beef blood, iron filings and cement", before planting the giant beneath a tree that had been tunneled under.