The Skeleton in Armor was a human skeleton dressed in a bronze breastplate and belt and buried with artifacts, including metal arrowheads, that was exhumed from a digging at Fall River, Bristol Co., Massachusetts during 1831, and subsequently destroyed during the Great Fire of 1843 while on display at the Fall River Athenaeum. Prior to their destruction, the skeletal remains and burial artifacts were the object of speculation as to their origin: many supposed they had belonged to local aboriginal peoples, while others advanced hypotheses that they were Phoenician or Norse, the latter claim being notably advanced as a poetic basis for Henry Wadsworth Longfellow's ballad The Skeleton in Armor.

From an edition copyrighted 1876, though the ballad itself was originally written around 1841, being originally published in Lewis Gaylord Clark's The Knickerbocker. 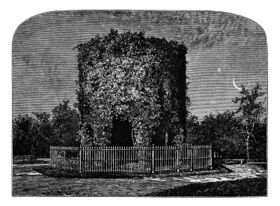 The Round Tower by E. A. Abbey.

THIS Ballad was suggested to me while riding on the seashore at Newport. A year or two previous a skeleton had been dug up at Fall River, clad in broken and corroded armor; and the idea occurred to me of connecting it with the Round Tower at Newport, generally known hitherto as the Old Wind-Mill, though now claimed by the Danes as a work of their early ancestors. Professor Rafn, in the Mémoires de la Socéité Royale des Antiquaires du Nord, for 1838-1839, says:—

"There is no mistaking in this instance the style in which the more ancient stone edifices of the North were constructed,— the style which belongs to the Roman or ante-Gothic architecture, and which, especially after the time of Charlemagne, diffused itself from Italy over the whole of the West and North of Europe, where it continued to predominate until the close of the twelfth century,— that style, which some authors have, from one of its most striking characteristics, called the round-arch style, the same which in England is denominated Saxon and sometimes Norman architecture.

"On the ancient structure in Newport there are no ornaments remaining, which might possibly have served to guide us in assigning the probable date of its erection. That no vestige whatever is found of the pointed arch, nor any approximation to it, is indicative of an earlier rather than of a later period. From such characteristics as remain, however, we can scarcely form any other inference than one, in which I am persuaded that all, who are familiar with Old-Northern architecture, will concur, THAT THIS BUILDING WAS ERECTED AT A PERIOD DECIDEDLY NOT LATER THAN THE 12TH CENTURY. This remark applies, of course, to the original building only, and not to the alterations that it subsequently received, for there are several such alterations in the upper part of the building which cannot be mistaken, and which were most likely occasioned by its being adapted in modern times to various uses; for example, as the substructure of a windmill, and latterly as a hay magazine. To the same times may be referred the windows, the fireplace, and the apertures made above the columns. That this building could not have been erected for a wind-mill is what an architect will easily discern."

I will not enter into a discussion of the point. It is sufficiently well established for the purposes of a ballad; though doubtless many an honest citizen of Newport, who has passed his days within sight of the Round Tower, will be ready to exclaim with Sancho, "God bless me! did I not warn you to have a care of what you were doing, for that it was nothing but a wind-mill; and nobody could mistake it, but one who had the like in his head."

Speak! speak! thou fearful guest,
Who, with thy hollow breast
Still in rude armor drest,
Comest to daunt me!
Wrapt not in Eastern balms,
But with thy fleshless palms
Stretched, as if asking alms,
Why dost thou haunt me?"

Then, from those cavernous eyes
Pale flashes seemed to rise,
As when the Northern skies
Gleam in December;
And, like the water's flow
Under December's snow,
Came a dull voice of woe
From the heart's chamber.

"I was a Viking old!
My deeds, though manifold,
No Skald in song has told,
No Saga taught thee!
Take heed, that in thy verse
Thou dost the tale rehearse,
Else dread a dead man's curse
For this I sought thee.

"Far in the Northern Land,
By the wild Baltic's strand,
I, with my childish hand,
Tamed the ger-falcon;
And, with my skates fast-bound,
Skimmed the half-frozen Sound,
That the poor whimpering hound
Trembled to walk on.

"Oft to his frozen lair
Tracked I the grisly bear,
While from my path the hare
Fled like a shadow;
Oft through the forest dark
Followed the were-wolf's bark,
Until the soaring lark
Sang from the meadow.

"But when I older grew,
Joining a corsair's crew,
O'er the dark sea I flew
With the marauders.
Wild was the life we led;
Many the souls that sped,
Many the hearts that bled
By our stern orders.

"Many a wassail-bout
Wore the long Winter out;
Often our midnight shout
Set the cocks crowing,
As we the Berserk's tale
Measured in cups of ale,
Draining the oaken pail,
Filled to o'erflowing.

"Once as I told in glee
Tales of the stormy sea,
Soft eyes did gaze on me,
Burning yet tender;
And as the white stars shine
On the dark Norway pine,
On that dark heart of mine
Fell their soft splendor.

"I wooed the blue-eyed maid,
Yielding, yet half afraid,
And in the forest's shade
Our vows were plighted.
Under its loosened vest
Fluttered her little breast,
Like birds within their nest
By the hawk frighted.

"Bright in her father's hall
Shields gleamed upon the wall,
Loud sang the minstrels all,
Chanting his glory;
When of old Hildebrand
I asked his daughter's hand,
Mute did the minstrels stand
To hear my story.

"While the brown ale he quaffed,
Loud then the champion laughed.
And as the wind gusts waft
The sea-foam brightly,
So the loud laugh of scorn,
Out of those lips unshorn,
From the deep drinking-horn
Blew the foam lightly.

"She was a Prince's child,
I but a Viking wild,
And though she blushed and smiled,
I was discarded!
Should not the dove so white
Follow the sea-mew's flight
Why did they leave that night
Her nest unguarded?

"Scarce had I put to sea,
Bearing the maid with me,—
Fairest of all was she
Among the Norsemen!—
When on the white sea-strand,
Waving his armèd hand,

"Then launched they to the blast,
Bent like a reed each mast,
Yet we were gaining fast,
When the wind failed us,
And with a sudden flaw
Came round the gusty Skaw,
So that our foe we saw
Laugh as he hailed us.

"And as to catch the gale
Round veered the flapping sail,
Death! was the helmsman's hail,
Death without quarter!
Mid-ships with iron keel
Struck we her ribs of steel;
Down her black hulk did reel
Through the black water!

"As with his wings aslant,
Sails the fierce cormorant,
Seeking some rocky haunt,
With his prey laden,
So toward the open main,
Beating to sea again,
Through the wild hurricane
Bore I the maiden.

"Three weeks we westward bore,
And when the storm was o'er,
Cloud-like we saw the shore
Stretching to lee-ward;
There for my lady's bower
Built I the lofty tower,
Which, to this very hour,
Stands looking seaward.

"There lived we many years;
Time dried the maiden's tears;
She had forgot her fears,
She was a mother;
Death closed her mild blue eyes,
Under that tower she lies;
Ne'er shall the sun arise
On such another!

"Still grew my bosom then,
Still as a stagnant fen!
Hateful to me were men,
The sunlight hateful.
In the vast forest here,
Clad in my warlike gear,
Fell I upon my spear,
O, Death was grateful!

"Thus, seamed with many scars
Bursting these prison bars,
Up to its native stars
My soul ascended!
There from the flowing bowl
Deep drinks the warrior's soul,
Skoal! to the Northland! skoal!"
—Thus the tale ended.