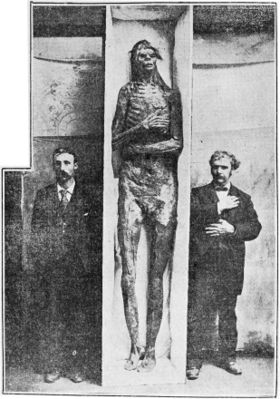 The San Diego Giant (centre), surrounded on either side by the anonymous exhibitor (right) and Prof. W. J. McGee (left) of the Smithsonian Institute.

The San Diego Giant was a manufactured mummy, once exhibited as the "tallest human giant who ever lived." According to contemporary news reports, the mummy had been discovered by unidentified prospectors in a cave near San Diego, California in 1895,[1] and had been transported around the country as a travelling exhibit, eventually being offered for sale to the Smithsonian Institution; however, it was later reported, terms with the Smithsonian could not be agreed upon, and the mummy was instead purchased by Frederick "San Diego" Rawson, then a Berkeley County deputy marshal, who announced plans to tour it across California.[2] Over a decade later, an article about fraudulent artefacts related new details: that the mummy had been shown at the 1895 Cotton States and International Exposition in Atlanta, Georgia, attracting the interest of members of the Smithsonian; the exhibitor offered it to the museum at a price of five hundred dollars; and the institute had a skin sample from the mummy tested and it was found to be gelatine,[3] presumably putting the kibosh on any deal and opening the way for Rawson's acquisition.

For his part, Rawson was reported to have been involved with a travelling circus show that ran through the West for a short period before leaving California for the Alaska gold fields, and his collection of paraphernalia, left behind, was offered for sale as abandoned storage by D. S. Duggan of Berkeley.[4]