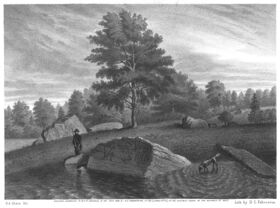 Dighton Rock is a 40 ton (36.29 mt) crystalline sandstone boulder into which have been carved petroglyphs of unknown origin, first recorded as having been discovered by Plymouth Colony settlers during 1680 in the shallows along the east bank of the Taunton River near the town of Dighton. In 1799, the land that the rock was located on was annexed by the town of Berkley, though kept the name of the former township; and it is currently held at the museum of Dighton Rock State Park in Berkley, Bristol Co., Massachusetts, where it was relocated during 1963.