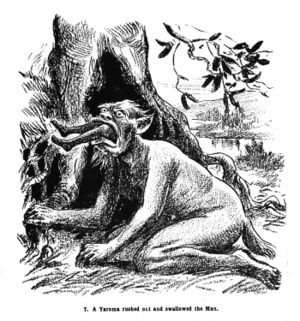 As depicted in R. H. Mathew's account of the legend, Notes on the Aborigines of New South Wales (1907).

Yaroma is an appellation for a legendary cryptid of the south-east coastal regions of New South Wales in Australia, the name reportedly used by local Aboriginals to describe "a creature closely resembling man, but of greater stature," with "hair all over the body." They are further detailed as having a mouth large enough to swallow a person whole and long teeth that they "sharpen on rocks in high ranges," and that they have large, long feet, and move by taking long jumps, each of these producing a "loud sudden noise, like the report of a gun."[M]