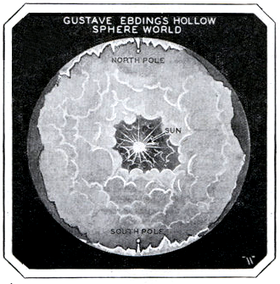 Gustav Fred Ebding (February 9, 1887 - August 14, 1975) was an American machinist and inventor, advocate of a concave-type Hollow Earth theory (comparable to that proposed by Cyrus Teed, a.k.a. Koresh),[4] and sometime political activist, having legally challenged Hoover's 1928 election as illegitimate (and subsequently faced an insanity charge for his trouble),[H] and mounted a failed run for Congress in 1930.[C]

Ebding ran for the U.S. House of Representatives in Ohio's 21st district, being soundly defeated by Robert Crosser, who would become the the longest-serving Ohioan member of Congress.