Orrin Robertson (May 28, 1858 - October 30, 1933) was an American medical practitioner, promoter of patent medicines, magnetic healing, and similar forms of treatment, and proprietor of several sanitaria across the Midwestern United States. 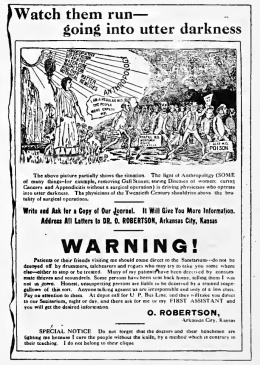 As we have ascertained, Orrin Robertson was the twin brother of Ann Robertson, both born May 28, 1858, in Cass County, Missouri, to parents Jefferson and Martha. The Robertson family relocated to McKinney, Texas soon thereafter, where they would remain for some decades, working a farmstead.[6]

Following his graduation from law school at the University of Iowa, Robertson served as editor for Texas newspapers, the McKinney Democrat[7][8] (from February 1884 until April 1885)[9] and the Ballinger Texas Eagle,[10] and was duly elected as a member of the Texas Press Association.[11] He was reported to have been possessed of "a fiery disposition," courting frequent controversy,[12] including at least one incident that led to arrests after a fight with a disgruntled jailer whose management had been attacked in an editorial.[13]

His sister Ann passed away on October 27, 1885,[14] reportedly of tuberculosis ("consumption"), an illness which had plagued her some years of her life.[15]

"I do know I was validictorious"

By his own accounting, Robertson "received thirty-one diplomas from various institutions of learning both in America and in Europe," including doctorates in law and medicine from the University of Iowa. Additionally, he counted himself as being: a fellow of the Eastern Section of Theosophy; member of the Society of Oriental Mystics; practising minister with the Chirothesian Church of Faith (Los Angeles), having qualifications as a Doctor of Spiritual Science and a Doctor of Philosophy; and a former instructor at Edwin D. Babbitt's New York College of Magnetics.[16] Robertson was also credited as belonging to: the Temple of Moomntaj-Lyumbia, "Ka Lama Zurija" India (courtesy L. W. de Laurence); the Ancient Order of Oriental Mystics; the New York Institute of Science; and the College of Therapeutics.[17]

Additionally to his sundry membership degrees and graduate work, Dr. Robertson was also cited as the founder of "Texas Health College" (1892),[19] which awarded M.D. degrees to paying students,[20] and the "American University of Anthropology" of Quenemo, Kansas (1902).[17]

"Come direct to the Sanitarium"

In the first decades of the twentieth century, Dr. Robertson engaged himself as the lead doctor and proprietor of several "Anthropological Non-Surgical Sanitarium" businesses, setting up shop in Missouri at Excelsior Springs[21] and Kansas City; in Arkansas at Sulphur Springs; and in Kansas at Wichita, Quenemo, and Arkansas City. These sanitaria were short-lived, most existing only a few years, and the last, in Arkansas City, closed under a cloud of legal problems arising from Robertson's being declared bankrupt in 1916 and his subsequently fleeing of the state (with his lover).[22]

Wanted on a federal indictments for conspiracy and evasion of the bankruptcy act, Robertson travelled extensively between 1917 and 1922, making his way across the United States, crossing into Canada and Mexico, before eventually being caught while operating another "magnetic healing" sanitarium in Williston, North Dakota.[23] On his being returned to Wichita by U.S. Marshals and brought to trial, the indictments were quashed by federal judge Pollock, who "held that all indictments against Robertson were defective."[24]

Despite the legal actions against him and negative publicity in the press - as a man not known "to go with the push" - Robertson was back in the game by 1926, this time at Chariton, Iowa as the Consulting Specialist for the "Vita-O-Pathic Non-Surgical Sanitarium,"[16] a post he kept for some years before returning to Kansas, where he passed away in October 1933.[2]

Robertson's claims to many areas of expertise included a broad cross-section of quack disciplines over the course of his long and storied career, counting among them what he called "Anthropology" (The Pneumo-Psycho-Manas-Soma System!)[17] and "Vita-O-Pathy,"[25] both to which he claimed credit as "Discoverer, Originator and Founder." His method was typically advertised as including "magnetic healing" and his own patent medicine, Robertson's Seven Sacred Oils, styled as the "Elixir of Life".

The Robertson oils, made from special plants "which grow in seven different climes," were to be anointed upon seven different parts of the body, including the head and throat, esophagus, stomach, and rectum, for the ultimate goal of curing diseases of the liver and removing gall-stones.[26] The true composition of the oils are unknown to us at this time.