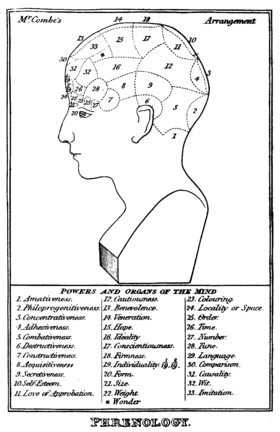 Phrenology (from Greek: φρήν phrēn, "mind" + λόγος logos, "knowledge"; "knowledge of the mind") is a hypothesis that locates individual mental faculties, such as reasoning or moral character, in particular regions or "organs" of the human brain, and proposes that such faculties are discoverable by cranioscopy (measurement of the skull), which is supposed by phrenologists to be a generally accurate outline of the brain mass. The theory was initially detailed by Franz Joseph Gall, a German neuroanatomist, during the early 19th century.