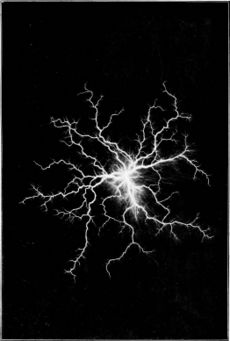 Positive Pole of an Electric Spark, from Flammarion's Thunder and Lighting (1905).

The Electric Universe hypothesis may refer to any of several observational explanations that place strong emphasis on the interactions of the electro-magnetic forces in understanding physical laws, producing an alternative physics where the electric is posited as the central force in the universe, either altering or rejecting outright the role of gravity as a fundamental force as detailed in more conventional physics.

Claimants and their Proofs

Warder's personal cosmology of an electric universe included speculation that "the sun is a vast generator of electric currents which cause heat in the atmosphere of the planets only where it is needed," that electro-magnetic, atomic, and spiritual force are the only forces in the universe (abandoning gravitation entirely), and that the sun is habitable and likely to be Heaven itself, as described in the Book of Revelation.