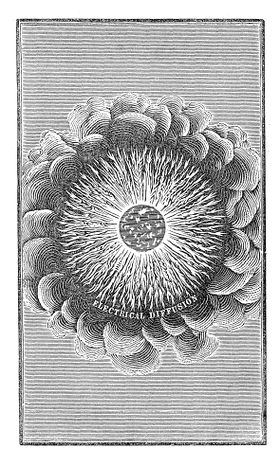 Chapman's Principia, or, Nature's First Principles: Theory of Universal Electro-Magnetism, Simplified Explaining the Elements of the Important Discovery of the Laws of Nature, Which Regulate the Changes of the Elements: Exposing the Numerous Discrepancies of the Popular (Erroneously So-Called) Newtonian Theory of Gravitation Alone Without Repulsion: Demonstrating the Existence and Operation of Repulsive Force, Co-Extensively with Gravitation is a book, authored by L. L. Chapman and first published at Philadelphia by Campbell & Co. in 1855, that details, as the title suggests, an unusual hypothesis of electrical influences, in particular proposing that fluctuations of electricity in the atmosphere, which may be observed as coloured light, can be monitored to predict weather patterns, earthquakes, disease outbreaks, and so forth. A monthly forecast newsletter, The Monthly Rainbow, or Chapman's Precalculations for Elementary Changes, was published as a supplement to the book, and the Principia itself was reportedly intended to be revised every six months.

Dr. C. professes, and with a showing of truth, that he has discovered not only the cause of earthquakes, cholera, and the prime source of all human afflictions, but that he can also tell, some time previous, when earthquakes will occur, when there will be likely to be cholera, &c., &c. He founds his theory upon the principle that light is electricity — that the different colored rays of light produce different effects upon mind and matter under different circumstances — and has a model by which he can foretell the kind, or color, of the rays of light.

A friend in Philadelphia has forwarded a copy of a small monthly sheet entitled the "Monthly Rainbow," or "Chapman's Precalculations for Elementary Changes," which is the singular title of a very remarkable and unique publication.

The "Monthly Rainbow" is devoted to the publication of certain astronomical calculations by Dr. L. L. Chapman, which are supposed to indicate the conditions of the weather and other electric influences which operate upon the human constitution as well as upon inanimate nature — governing the development of Epidemics, Rains, Winds, Frosts, Storms, and Earthquakes. One column of the publication is given to these calculations of atmospheric changes and the remainder of the sheet is occupied by the stereotyped explanatory matter which is necessary to the understanding of the table of calculations. These calculations of elementary changes are, according to Dr. Chapman, "based upon the discovery of the physical laws and harmony of electrical action pervading the solar system as involved in the differing effects of light modified or polarized by differing angles of reflection on a large scale."

The following is the introductory explanation which Dr Chapman gives of his discovery:

"The discovery of those laws of nature which regulate the changes of the elements, and their development to an extent which would admit of the precalculation of those changes for an indefinite period in the future, has been a subject of eager but fruitless research by mankind in all ages; whilst the numerous meteorological observatories throughout the United States, Canada, Europe, Northern, Asia at the Cape of Good Hope, in the islands of the South Sea, &c., give evidence of the deep interest at present pervading the scientific world in reference to their discovery.

"Indeed, what subject of a physical character can be more universally or importantly useful to mankind, than the discovery of those natural laws which regulate the sweeps of desolating pestilence, (the cholera, &c.;) of destructive storms on land and sea; of withering blight; or of those less prominent but constantly occurring changes in the electrical condition of the atmosphere, which by their physical effect on the organization of animal life, control and are so constantly changing the phases of sickness, or the health, feelings, and humors of mankind, the dispositions of the animal creation? &c.

"For every variation in the health, feelings and humors of mankind, and in the minutiae of physical life, depends upon and fluctuates with the changes and fluctuations in the quantity and modification of the electricity of the atmosphere, supplied as stated in the theory following.

"The circumstance which led to the discovery of these important lava of nature are simple in their character. Some nine years ago my attention was drawn to their investigation, from noticing the correspondence between the changes of the atmosphere, and the paroxysms of a chronic nervous ailment with which I was afflicted, and from which I had despaired of obtaining permanent relief. I was urged on by the desire of knowledge which might involve the future enjoyment of my health, and the conviction that electricity, (being analogous to, if not identical with, light,) was not confined to the earth exclusively, but that it was the common property of the solar system, transmissible with the freedom and velocity of light, from one body of that system to another; and that its operation on that extended scale, involved the changes of the elements, as well as the movements of the heavenly bodies.

"I have not space here to narrate the progress of my investigations and the remarkable corroborations which have been constantly transpiring during that interval — sufficient, when known, to astonish mankind. Some are briefly glanced at in the notices of the press on the fourth page but they are given more at length in the first section of my Principia.

"As will at once be seen, the terms of this sheet are not based upon the expenditure of paper and printer's ink, for the tables and notes of precalculation will be the only matter which will be changed each month. The other matter, being indispensable for explanations, &c., will remain. These precalculations have each one to be made out by rules similar to the elements for eclipses. They require long and tedious study, involving the most wearisome mental labor to make out. So much so, that my time left in connection with limited compensation, &c., has been insufficient to enable me to push the subject and had I not been conscious of involved responsibility to mankind in bringing a discovery so important to practical utility for their benefit, I should have given up its publicity long since.

"Hoping now to be able to devote my time chiefly to the subject, I have undertaken to give an additional series of calculations on the third page, equally important, in many cases, with that which I have given for several years past and trust the consequent change in the terms of the Rainbow, for the purpose of sustaining an increased effort in giving a more broadcast diffusion to knowledge so important, and increase facilities for due attention and further investigation, will meet the approval of my friends and the public.

"Hence the proof by analogy is positive, that currents of ray, polarized by reflection from the different bodies of the solar system, sometimes enveloping the entire earth, must produce the same effects on a more extended scale, and supply more or less electricity to the elements, just as these currents of rays may happen to be polarized (or modified) by reflection in more or less highly electrical angles. Hence the origin of those electrical fluctuations of excess and deficiency — electrical currents, magnetic storms, &c., which have excited the surprise, and eager but fruitless research of the scientific world within a few years past.

"The unchanging mathematical laws of polarization, bring those periods when more or less highly electrical polarized currents will be intercepted, and supply more or less electricity to the elements, within the limits of precalculation like eclipses. And I have found, during eight year's observation, that electrical phenomena, storms, earthquakes, &c., have usually occurred at periods when excessive supplies were indicated. Also, that sickness, cholera, vegetable defection, or blight, &c., usually prevail, when great and long continued deficiency of electrical supplies to the elements are indicated.

"Thermal, and other changes of atmospheric temperature, I have usually found to correspond, to within the hour, with intercepted currents, as precalculated, according to the analogy of the solar spectrum, four times out of five, in the average of the month."

"It is impossible that electrical variations, so marked and general, should fail to affect the nervous organization of animal life; and to complete the proof, we find that changes in the health, feelings, and humors of mankind, and in the dispositions of animals, depend upon these electrical variations, and that even more sensitive vegetable production, flowers, &c., show their susceptibility to their effects.

"These hourly periods, like the approaching crisis of electrical currents, are, when unfavorable periods when the well are more depressed in spirits, and when less favorable humors prevail, &c. Also, when the shorter paroxysms in sickness are more liable, and when the death straggle is most liable to set in with the enfeebled, especially if neglected.

Chapman's Principia, which presents the explanation of his discovery, is published every six months. A volume of the Principia, over two hundred pages, is ready for delivery at the price of one dollar. Campbell & Co., 73 south 4th street, Philadelphia, are the publishers. If opportunity and time permit hereafter, these interesting suggestions or discoveries will receive further notice.