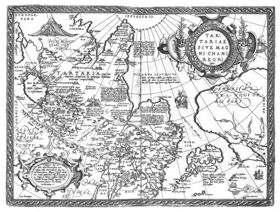 Abraham Ortelius's 1601 map TARTARIAE SIVE MAGNI CHAMI REGNI ("TARTARIA OR THE GREAT CHAMI'S KINGDOM"). Chami is an archaic term for Khan, as in Genghis Khan (Zingis, Cangis) and his inheritors.

Tartary (Latin: Tartaria) is a term that appears in historical use as a toponym, particularly in European sources, for a broad territory encompassing grand swathes of central Asia as well as Manchuria and Siberia, and in more contemporary use among certain quarters as the name of an empire or nation-state based in Central Asia of extraordinary advancement and technologic achievement that is supposed to have been destroyed by a deluge of mud and has subsequently been concealed from public attentions by a global conspiracy.