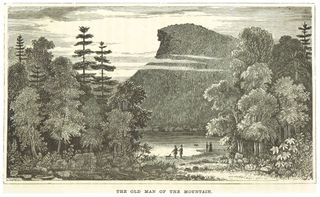 The Old Man of the Mountain: a former Titan, now a Fossil?

Not to be confused with the Mud Flood hypothesis.

The Mud Fossil hypothesis (or Mudfossil hypothesis) is an observational explanation, proposed by Roger Spurr and others, for the apparent resemblance to living entities of some landforms of the Earth's continental crust, particularly rocky outcrops of such life-like appearance (mimetoliths), which holds that such resemblances are due to the fact they were living entities, constituting evidence that many (if not all) such mineral forms are composed of the fossilised remains of life forms, and, in the case of larger outcrops and mountain faces, that some of these life forms were of enormous size.