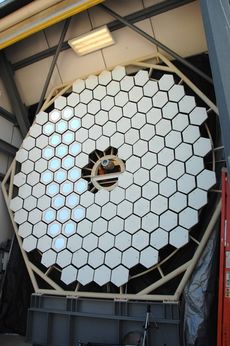 The Sun Simulator hypothesis may refer to any of several observational explanations that broadly assert the Sun, as perceived by persons on the planet Earth, is an artificial construct, either the product of an array of orbital devices or a singular device, and that emissions of solar energies are filtered through or purely a product of this construct. In some versions of the hypothesis, this explicitly means a second, artificial star that exists alongside the original, while in others it refers to a replacement star, the original having been extinguished or otherwise occluded.

The proposed origins of this solar simulator are greatly varied, some authors proposing relationships to Planet X theories and Project Blue Beam. In particular, George Geier's 1963 Solar Simulator patent (US3325238) and J. F. Hall, Jr.'s 1966 Illumination System patent (3239660) are sometimes referenced as a technological evidence of the hypothesis.