A Black Hole at the Center of Earth Plays the Role of the Biggest System of Telecommunication for Connecting DNAs, Dark DNAs and Molecules of Water on 4+N- Dimensional Manifold (2019 paper) 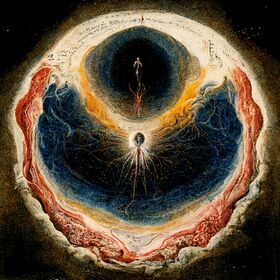 Midjourney AI's interpretation of the super-mass at the core of the Earth (CC BY-NC 4.0)

The paper's content is difficult to fully explicate, potentially by design, but starts from the proposition that there is a black hole at Earth's core, a hypothesis that originated with Louise Riofrio,[1][2] and from there conjectures the following: 1. that the black hole is better described as a black brane; 2. the black brane has been formed by highly-compacted biological matter, particularly DNA; 3. the black brane emits waves comparable to DNA topoisomerases, enzymes involved in DNA coiling; 4. the waves produce effects in dark DNA that are measurable via a 4+n-dimensional manifold; 5. the dark DNA effected by black brane waves interacts with both DNA and water molecules, in the latter case being responsible for their retention of memories (re: Masaru Emoto). To simplify further, the paper may be read as support of the view that there is higher-dimensional, biochemically-active super-mass at the core of the Earth that interacts through an imperceptible method of signalling via dark DNA with the lifeforms on the surface.

It is speculated that the now-retracted paper was algorithmically-generated, and may have either been an attempt at a scholarly publishing sting, intended to show the publisher failed to conduct an adequate review of the paper prior to publication, or was submitted to increase the number of published academic papers credited to the named authors.