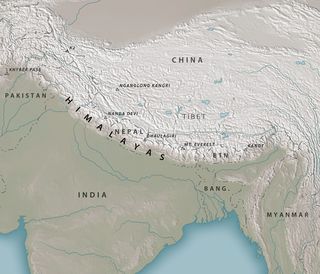 Yuga (English: Vast [yu] + Body [ga]) is the name of a legendary civilisation that, according to Mark Probert (or his channel, E Yada Di Shi'ite), existed in the Himalayan Mountain region approximately five hundred thousand years ago and ceased to exist following a cataclysmic earthquake.[1]

According to the Yada seance reports, the civilisation was founded by Ni Sep Ni Ha ("seventh son of Ha"), who came from Nali ("river of great force"), a nation situated in what is now the Gobi Desert, which was destined to be destroyed in a flood. Ha and his followers had migrated east to the mountains, eventually coming to a valley region that was home to large, hirsute, wide-eyed beings they called "Yuga"; the Nalian settlers quickly established themselves on the land, enslaving the original inhabitants and eventually driving them into the higher mountains (as an origin of the Yeti story).[2]

In the later era of the Yu civilisation, which was said to have existed for just over a millennium, there was a major city in Yuga known as Kaoti ("City of Temples"), based around thirty-three temples,[3] where a heliolatric mystic order called "Shi'ite" (not directly related Shia Islam) trained the priestly class.[1]

The civilisation purportedly ceased to exist following a major earthquake that killed some eighty-million people (2/5ths of all citizens of Yuga), one thousand and twenty-four years after it came into being.[1]