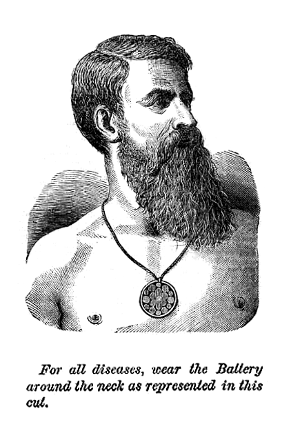 Illustration depicting how to wear your Boyd's Battery. 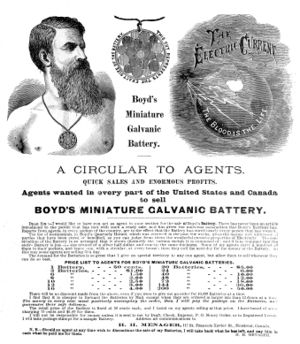 An advertising circular for Boyd's Battery.

The Boyd's Battery (or Boyd's Miniature Galvanic Battery) is an electro-therapeutic medical medallion, advertised as a generator of healing electric current for the wearer, where this current was said to be produced by the reaction of the varying metals constituting the battery with the wearer's skin (as a galvanic response).

The battery was advertised as having been invented by Professor J.C. Boyd, for whom it is named, and sold beginning in 1878 through regional agents of Boyd's Galvanic Battery Co. However, in New York Supreme Court proceedings, Boyd himself testified that he was unaware who had invented the medallion, and that the Galvanic battery business had been purchased and operated by Ellis H. Elias on his behalf.[1] Further testimonial, given in the same trial by Richard H. Elias, contended that Ellis H. Elias had been in business with George Sagendorph previously, that the business belonged to Ellis H. Elias, and he had simply continued selling Sagendorph's Battery under Boyd's name.[1] (All of which is quite contrary to later advertorial claims by Boyd Co. that Sagendorph had swindled the design.)

The battery itself is approximately 3 centimetres in diameter, and is composed of 12 individual disks of copper, brass, German silver, and nickel, surrounding a central copper rosette, itself with a brass disk plugged into the centre, all of which is encircled by a brass ring.

According to the advertising copy, a Boyd's Battery acts according to the principles of Galvanism, whereby "the union of two or more metals" (through Galvanic corrosion) produces electricity. In the case of Boyd's Battery, the electrolyte is said to be the "natural humidity of the skin", which in reacting with the different metals of the medallion produces a "constant but gentle flow of electricity."[2]

Among other afflictions, a Boyd's Battery was recommended to those subject to any of the following symptoms: "Restless Nights, Nightmare, Palpitation of the Heart, Loss of Confidence, Dizziness, Fainting Spells, Loss of Memory, Fullness of Blood, Fits of Melancholy, Debilitated, Lack of Power of Will and Action, Disordered Condition of the Liver, Blood, Kidneys, or Urinary Organs". It was proposed that "these troubles arise mostly from relaxation or debility, for the relief of which electricity is eminently adapted."[3]