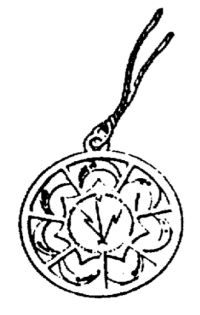 The Elias Electro Galvanic Medal is an electro-therapeutic medical medallion, patented 21 October 1879, by William M. Elias,[1] a noted con-artist, whose brother (and fellow swindler), Ellis H. Elias, was involved in the manufacture and distribution of both the Sagendorph Battery and Boyd's Battery.

The patented design of the Elias Medal is described as "consisting of a central scalloped hub having radiating spokes which are surrounded by an outer rim, and between which are crescent connections."[1] On the manufactured piece, the outer rim has the text "The Elias Electro Galvanic Medal" and "Patented October 21, 1879" engraved, while the central piece features the words "Positive Pole" (or "Negative Pole" opposing) above a cloud formation casting out seven lightning bolts.