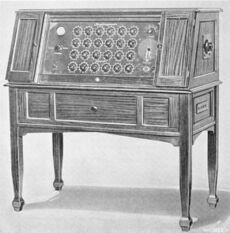 Calbro Magnowave was the brand name of a line of radionic instruments and the name of the corporation that manufactured them, the word "Calbro" being derived from the surnames of the two founders, W. R. Caldwell and Myrtle Ross Bronson.

Calbro-Magnowave, Inc. was incorporated at Omaha, Nebraska in September 1927 for the manufacture and sale of "physical and electrical instruments" and operation of sanitariums.[1] C. E. Schillig, a 1914 graduate of the Palmer School of Chiropractic (PSC) and former head of the Universal Chiropractors' Association (UCA), became Secretary of the company in 1930, and, by 1932, its operations and manufacturing were relocated to Detroit, Michigan.[2]