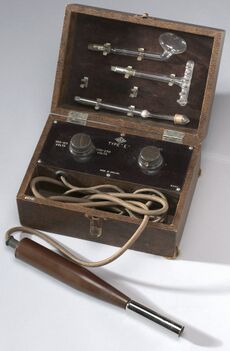 Violet Ray is the common name for any high frequency, low current electrical instrument used in electro-therapy, particularly D'arsonvalisation, popular during the first decades of the twentieth century thanks to the wide proliferation of the devices through a number of different electrical manufacturers. The name is derived from the violet-coloured glow of the argon gas filling the glass vacuum tubes used as electrodes when the instrument is being used.

Most manufacturers of violet ray instruments in the early twentieth century made grandiose claims regarding the medical applications of their devices, presenting them as positive cure-alls for all manner of physical ailments. Consequently, in the United States, such devices became the object of routine seizures by the Food and Drug Administration (USFDA) for misleading claims under the Federal Food, Drug, and Cosmetic Act (FFD&C) of 1938, and violet ray instruments gradually ceased to be manufactured in the country over the following decades.