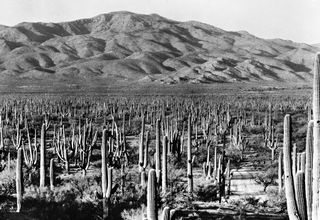 Saguaro National Park, c. 1935 - likely not a home to the magnetic variety.

Magnetic Saguaro Cactus is an appellation for a type of cryptobotanical cactus, reported as existing in Arizona (and particularly around Ripsey in Pinal County), which has been "magnetised" (both rendered animate and possessing magnetic force) by veins of charged metals, such as copper, and, being "magnetic" in character, will positively attract or negatively repel unwary creatures into their thorny spikes, such prey being crushed and pulverised into a mucilaginous substance for digestion by the cacti. The original reports of the Magnetic Cacti were attributed to Joseph Mulhatton, the "Prince of Liars," a notorious hoaxer, who had previously authored claims regarding carnivorous plants such as the Arbor Diaboli (or Devil Tree of Mexico).

Joe Mulhatton was in Florence this week from the Ripsey country, where he has recently discovered a magnetic cactus, which from his account, must be a wonderful species of vegetation. Its attractive powers are so great that it draws birds and animals to it and impales them on its thorny spikes. Mr. Mulhatton approached no nearer than 100 feet to the cactus, which is of the saguara variety, yet at that distance it was all he could do to resist its influence to draw him to it. While in town he purchased a long rope, which he will tie around his body, and four of his friends will take hold of it and allow him to approach near enough to minutely examine the wonder without danger. Mr. Mulhatton, who is one of our most truthful citizens, promises an accurate description of his recent find for publication in the TRIBUNE.

(And, on page 2 of the same issue, a single sentence: Nobody supposes Joe Mulhatton would lie about a little thing like a cactus.)

The Magnetic Cactus.
The TRIBUNE is in receipt of additional particulars in regard to the wonderful Magnetic Cactus recently discovered in Ripsey country. The following letter will fully explain itself:

Editor FLORENCE TRIBUNE:
The magnetic cactus you wrote about in last week's Tribune in a species of the Giant Sahuara. It is found in many places between Casa Grande and Florence, between Florence and Mesa and between Florence and Riverside.
There is a belt of earth within a radius of fifty miles of Florence that is very magnetic, no doubt caused by vast beds of copper or some other magnetic mineral that underlies it all, and this species of cactus from its fibrous nature acts like a telegraph instrument to receive and discharge the earth's vast surplus of magnetism, not required by the moon's and sun's magnetic attraction.
All the Magnetic Cacti in this neighborhood are either positive or negative. One attracts; the other repels.
Two tramps passing along the road just above Donnelly's a few nights ago took refuge under a bunch of this cactus.
One of the men was at once drawn up to and impaled on the sharp blades of the cactus, while its octopus-like arms folded around him, crushing him through and into the cactus, where his blood, flesh and bones turned into a pulp very much like ordinary mucilage, which tricked out slowly from the aperture made by the passing in of the man's body.
The cactus loses its magnetic power while it is digesting its victims. So we were enabled to look at this wonderful yet gruesome sight and report these particulars.
Our party consisting of some of the best known and most responsible citizens of Pinal county — James Elder, a well known mining man of Riverside; Clay Hockett, now of Florence; A. F. Barker, W. Y. Price, ex-District Attorney Sniffen, Wm. Truman, John Keating, Geo. Truman, Tom Peyon, Pete Brady and Lem Drais.
The body of the other tramp was repelled by the negative cactus and thrown about one hundred feet distant against a positive cactus where it underwent similar process to the one just described.
We left the sickening scene with sad hearts and with nothing to identify the victims. After and just before a great storm the attractive and repellant power of the cactus is indescribable. Calves, birds and young colts are attracted, impaled, drawn in and quickly converted by the digestive juices of the cactus into thick mucilaginous substance just described.
There is very little travel through this wild section of Arizona, or this species of cacti would have been written about sooner.