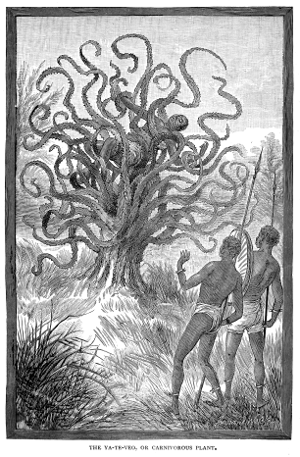 Yateveo (from the Spanish: Ya te veo, "I already see you") is an appellation for a cryptobotanical carnivorous plant with supposed origins in South America (and Africa). The man-eating tree was first described to English-speaking audiences by James William Buel in his 1887 book Sea and Land: An Illustrated History of the Wonderful and Curious Things of Nature Existing Before and Since the Deluge, the details of which he credits in particular to Antonio Jose Marquez, a Colombian doctor from Barranquilla.

Travelers have told us of a plant, which they assert grows in Central Africa and also in South America, that is not contented with the myriad of large insects which it catches and consumes, but its voracity extends to making even humans its prey. This marvelous vegetable Minotaur is represented as having a short, thick trunk, from the top of which radiate giant spines, narrow and flexible, but of extraordinary tenaciousness, the edges of which are armed with barbs, or dagger-like teeth. Instead of growing upright, or at an inclined angle from the trunk, these spines lay their outer ends upon the ground, and so gracefully are they distributed that the trunk resembles an easy couch with green drapery around it. The unfortunate traveler, ignorant of the monstrous creation which lies in his way, and curious to examine the strange plant, or to rest himself upon its inviting stalk approaches without a suspicion of his certain doom. The moment his feet are set within the circle of the horrid spines, they rise up, like gigantic serpents, and entwine themselves about him until he is drawn upon the stump, when they speedily drive their daggers into his body and thus complete the massacre. The body is crushed until every drop of blood is squeezed out of it and becomes absorbed by the gore-loving plant, when the dry carcass is thrown out and the horrid trap set again.

A gentleman of my acquaintance, who, for a long time, resided in Central America, affirms the existence of such a plant as I have here briefly described, except that instead of the filaments, or spines, resting on the ground he says they move themselves constantly in the air, like so many huge serpents in an angry discussion, occasionally darting from side to side as if striking at an imaginary foe. When their prey comes within reach the spines reach out with wonderful sagacity (if I may be allowed to apply the expression to a vegetable creature), and grasp it in an unyielding embrace, from whence it issues only when all the substance of its body is yielded up. In its action of exerting pressure upon its prey, this dreadful plant resembles the instrument used in the dark ages for inflicting a torturous death. It was made of two long iron cylinders, on the inside of which were sharp, projecting pikes. The victim was placed inside, and the two cylinders then brought forcibly together, thus driving a hundred or more of the pointed pikes into all parts of his body and producing a frightful death. Generally this inquisitorial instrument was made, somewhat crudely, to represent a woman, hence the name applied to it was "The Maiden," by which it is still known.

Dr. Antonio Jose Marquez, a distinguished gentleman of the city of Barranguilla, in the United States of Colombia, in describing this wonderful plant to the author, affirms that when excited it violently agitates its long, tentacle-like stems, the edges of which, rasping upon each other, produce a hissing noise which resembles the Spanish expression, ya-te-veo, the literal translation of which is "I see you." The plant is therefore known, in South America, by the name Yateveo. He further asserts that so poisonous are the stems that if the flesh of any animal be punctured by the sharp barbs, a rapidly-eating ulcer immediately forms, for which there is no known antidote, and death speedily ensues.

It is a singular thing, and much to be deplored, if such a voracious plant exists, that we can find no description of it in the most elaborate works on botany; and yet hundreds of responsible travelers declare they have frequently seen it, and not only watched it when in a normal condition, but one African explorer declares he once witnessed the destruction of a native who was accidentally caught by one. It has also been asserted that in the Fan country of Africa, criminals and those convicted of practicing witchcraft, are sometimes fed alive to this man-eating plant. All of which, however, I am inclined to doubt; not that there is no foundation for such statements as travelers sometimes make about this astonishing growth, but that the facts are greatly exaggerated.