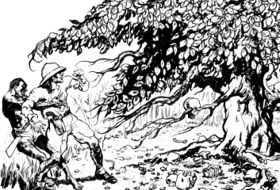 As depicted in the American Weekly

Man-Eating Tree of Mindanao is an appellation for a cryptobotanical carnivorous plant that was reported to exist on the island of Mindanao in the Philippines, the subject of two similar accounts: the first, a 1925 newspaper story by B. H. William in American Weekly, being the story of W.C. Bryant, a Mississippian planter, and Leon, his Moro guide; and the second, a 1927 newspaper story by Muriel E. Eddy relating perilous encounter of Mrs. Leoda Eddison and Sambino, her Moro guide, with the "death-dealing cannibal tree."