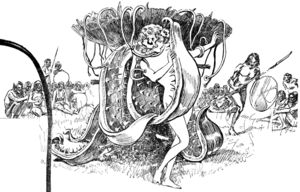 "Sacrificed to a Man-Eating Plant," a 1920 newspaper illustration depicting a young woman in the grips of the Crinoida Dajeeana.

Crinoida Dajeeana is a pseudo-taxonomical naming for a cryptobotanical carnivorous plant with supposed origins in Madagascar, also known more popularly as the Devil Tree of Madagascar or Man-Eating Tree of Madagascar. The man-eating tree was the subject of press attention during the late nineteenth century (and again in the early twentieth), originating from a report in the New York World of 26 April 1874; the authorship of the fantastical story would later be attributed to one Edmund Spencer by Frederick Maxwell Somers in the August 1888 issue of his magazine Current Literature.[1]

In the last number of Graefe and Walther's Magazine published at Carlsruhe, there is a letter in regard to the newly-discovered Crinoida Dajeeana, from the discoverer, Karl Leche, the eminent botanist, prefaced by some notes from Dr. Omelius Friedlowsky, whose deep research in vegetable physiology has had so many important results. Leche's letter, it appears, was originally addressed to Friedlowsky, and they seem to have been pursuing a subject of novel and startling interest, which is likely to give remarkable discoveries to science. Dr Friedlowsky says:

My special and only motive for publishing prematurely the history of my friend Leche's half-developed discovery is similar to that which influenced Darwin to bring out his book on the origin of species. His theory was not near developed but his title to priority in discovery was imperiled by the announcement of Mr. Wallace's researches in the Malayan Archipelago. Darwin himself, as well as some American botanists, have lately come so perilously near to the discovery of the problem Leche set himself to investigate, in their studies of drosera and sarracenia, that I think it is due to my friend's credit to make some preliminary announcement of the great progress he has already made towards establishing a point of contact of our organic systems with those of the universe at large through analysis of the constitution of some abnormal plants which have always hitherto puzzled the botanists. The point to which Karl Leche, at my suggestion, has been giving his attention latterly is briefly this: Certain plants such as drosera (with its outlying species dionea muscicapa), sarracenia, and some others, departing from the general law, instead of supplying food to animals turn the tables, capture them, and are themselves carnivorous. It has often occurred to me in connection with these insectivorous plants, so abnormal in their constitution, that they might have a widely different origin (or at least an origin widely different in point of time) from the common orders of plants inhabiting our globe, and that if I could establish the nature of this different origin upon reasonable grounds, I might at the same time afford a reasonable explanation at once of the origin and the primordial variations of life. When Leche went to Bombay in response to the call extended to him by the Medical College of that city, he went full of my ideas upon this vastly important subject, and prepared, as I advised him, to make special investigations into the habitats of all such abnormal plants as seem to depart from the characteristic traits of the flora of their respective countries. This I state here, because, while the theory is by no means far advanced, it was while in search of facts to countenance this theory that Leche discovered the remarkable and terrible Crinoida Dajeeana, of which his letter gives such a graphic and forcible description. After quite a long sojourn in India, Leche was induced to go to Madagascar by Dr. Bhawoo Dajee, the liberal-minded, intelligent Parsee physician of Bombay, who, indeed, supplied the means for the expedition, and made so many thoughtful provisions for my colleague's comfort as to win his gratitude and love. Dr. Dajee, it seems, represented to Leche that it was impossible to glean much in a field so carefully worked over by many botanists, and indeed almost exhausted by Hooker. When quite a young man Dr. Dajee had made a voyage to Madagascar in one of Sir Jamsetjee Jeejeebhoy's trading ships, and had been deeply impressed with the remarkably various and beautiful flora of that almost untraveled region. An excellent opportunity offered for going out in one of Cursetjee Jeejeebhoy's traders, which was to stop at Tamatave on her way to the Cape; so Leche embarked, attended by a Madagasy sailor for servant, Dr. Dajee having hired the fellow thinking he would be useful to Leche as guide and interpreter. That was more than two years ago. Since then I have received three letters from Leche — two by way of Bombay, one by way of the Cape — and now last week a fourth, which he had the luck to send by an Arabian trader to Zanzibar, whence it reached me via Aden. After writing of many other things Leche proceeded to say:

In this tantalizing fashion, after some private matters and messages, does Leche's letter end. I have been expecting his next with the utmost impatience, and will communicate its contents to you as soon as received.

Truncated versions of the story circulated almost immediately after the story first appeared, generally with a short preface text — "The New York World publishes the following unique production, said to have been condensed from a Carlsrhue magazine. The extract purports to be from a letter written by one Karl Leche, a traveler in Madagascar. The writer says:" — before leaping straight into the deep forest and the sacrifice to the Crinoida Dajeeana, skipping the introductory matter.

A year after the first cycle of the story, it again appeared, this time credited to Dr. Jay of the South Australian Register.

Fifteen years later, in a piece attributed to the Brooklyn Eagle, the story of "The Man Eating Tree" again re-appeared, this time rewritten almost completely, transforming the story into the style of a more conventional news article, and adding a minor salve to the conclusion: a new witness, unnamed, that reported the natives burnt the tree after the woman had been trapped in it.

Thirty years pass after the Brooklyn Eagle reprint, and the story again reappears, this time under the byline of a Dr. B. H. William, The Distinguished American Botanist, the title "The Remarkable Experiences of a Distinguished Scientist in Madagascar and How Science Explains the Existence of the Monstrous Growths Upon Which He Has Made Official Report."

Although he did not find a man-eating tree, Chase Salmon Osborn (former governor of Michigan) reported, of his 1913 trip, that he had made inquiries after it, and was told that belief in the tree was widespread among the native population of Madagascar; and, padding out the introductory chapter of his book, quoted at length the report of Dr. Carle Liche, whose story Osborn cited as having been first published in the New York World during 1880, and later the South Australian Register.

In 1932, it was reported that "a band of British explorers, including one woman, will land on the island of Sinbad the Sailor in a few weeks to search for the mysterious Madagascar 'sacrifice tree,' which devours human beings," an expedition which was to be led by one Captain V. de la Motte Hurst, "a Fellow of the Royal Geographic Society," and had hopes of capturing motion picture recordings of the tree.[2]

Ivan Mackerle refers in his article Man-Eater or Only Killer?, https://www.en.mackerle.cz/man-eater-or-only-killer  to an "L. Hearst" who mounted a four-month expedition of 1935 and his subsequent disappearance on a return expedition to Madagascar in search of further evidence; this is likely a reference to the earlier Hurst reports.