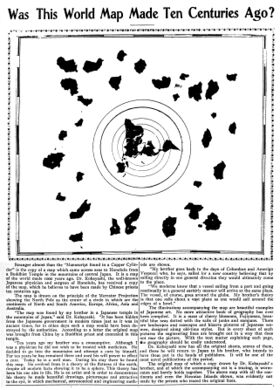 The Kobayashi Map is a rudimentary world map, described as being "drawn on the principle of the Mercator Projection" and showing the Hawaiian islands at bottom-center, that was purportedly based on an original, called "worm-eaten" and barely holding together, which was alleged to have been made by Chinese priests in around 900 A.D., and further claimed to have been rediscovered during the late nineteenth century at "a Buddhist temple in the mountains of central Japan," where it had been kept after being "brought from China by a Buddhist priest" at some unspecified time. The map was published in Hawaiian newspapers the Pacific Commercial Advertiser and the Hawaiian Gazette on 9 and 11 January 1907 respectively, the accompanying article stating the map had been discovered and copied by the brother of a Dr. Kobayashi, "the well-known Japanese physician and surgeon of Honolulu," who may have been Sanzaburo Kobayashi (1863-1926). The brother of Kobayashi had reportedly been interested on the basis that the map demonstrated "a theory of the flatness of the earth, despite all modern facts showing it to be a sphere."