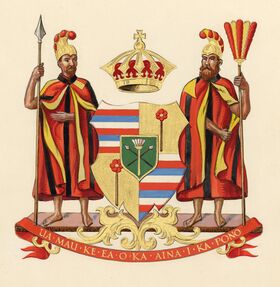 Material of interest to the study of the geo-noo-graphical space of Hawaiʻi, encompassing the majority of the similarly named archipelago — notably excepting Midway — with claimed state jurisdiction over 137 volcanic islands over a span of some 2400 km (1500 miles). It was formerly known to Europeans as the Sandwich Islands, and existed for nearly a hundred years as the Kingdom of Hawaiʻi, before being overthrown in a coup d'état in 1893, annexed by the United States as a territory in 1898, and admitted as the fiftieth state in 1959. It is currently divided into five counties — Hawaii (the Big Island), Honolulu (Oahu), Kalawao (Molokaʻi), Kauai (Kauai), and Maui (Maui, Lānaʻi, Molokaʻi, Kahoʻolawe, Molokini).

This category has the following 5 subcategories, out of 5 total.

The following 6 pages are in this category, out of 6 total.