Christian Carl Tuch was a German-born American plantation worker, sugar boiler, and inventor who held several patents for electrical devices, including for what he described as a "power generating machine", which he preferred in order to disassociate himself from the kooks who had tarnished the term "perpetual motion." 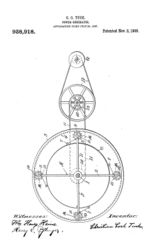 "When my machine is once out and adopted generally, steamboats will run without a pound of coal aboard, automobiles will not leave a trail of smell behind them, the smoke nuisance will be no more, heating, cooking and household work will be done by electricity, and the world will be revolutionized."

Thus Christian Carl Tuch modestly described a part of the things his "perpetual motion" machine is to accomplish, the word "modestly" being used advisedly, because if he has what he firmly believes he has there is no limit to what can be done with it. "And I have the royal fiush this time," he states; "it is no bobtail."

Mr. Tuch yesterday gave some further information about his idea, but declines to divulge any particulars concerning it until his foreign patents have been secured. He does not call it a "perpetual motion" machine. He dislikes that term, which has been associated so often with mechanical cranks that the use of it tends to discredit the user. What his machine is, he says, is a "power creating machine," which differentiates it from all other machines, for power, which are merely "power transmitting machines."

"I have simply figured out a way of applying old principles in a new way," says the inventor. "I do not care to say much more than this, except to state that the power is centrifugal power. I do not even claim to have originated the manner of utilizing it, having received my idea from a publication nearly a hundred years old. All I have done is to carry out, the suggestions made there to a practical end. It will only be a short while until I will have my idea protected throughout the world and then I can announce it. In the meanwhile, on the advice of my attorneys, I am keeping quiet.

"I have studied many of the machines invented for perpetual motion purposes. I know how many of them ought to work theoretically, but don't work practically. I have read much about them, but I do not class mine among them. I have been working on my idea since I was a boy and I have working models, so that I know what I am doing. My machine is the result of many experiments and brings into use only known principles."

One of the many interesting things Mr. Tuch prophecies as the result to be brought about by his invention is the great extension of the sugar industry in these Islands. Now, much land is uncultivated because of the excessive cost of pumping water on to it. When the pumps are run by a machine that cost nothing to run except for repairs or worn out parts, the water can be delivered cheaply and there will be no necessity for having non-irrigated land anywhere.

Patent rights have been granted C. C. Tuch, of this city, on a machine that runs itself on power self-generated, a perpetual motion machine, in other words. This power generating machine is one which its inventor expects will revolutionize the mechanical world. Yesterday he received word that the patent office had investigated his machine, had considered the merits of it and had agreed to issue the patent. Now he has applied for foreign patents and is prepared to put his invention upon the market.

Mr. Tuch makes his claims in a modest way, although the claims themselves are very far from modest. His discovery is in the utilization of centrifugal power in a new way, being, in short, to use the force developed in the turning of a flywheel to develop electricity to be reapplied to the wheel, his contention being that the momentum gained by the application of ten-horse power, for instance, will develop fifty- horse power, the extra power to be employed at will.

Mr. Tuch's drawings show the fly-wheels, side by side, each acting on a common dynamo through a shifting belt. Electrical power is to be applied to one wheel, sufficient to drive it at a high speed. Then the power is shut off, but the wheel continues to revolve through its own momentum. This momentum develops electrical power to be applied to the other flywheel, so that as soon as the momentum slackens on the one the other will be ready to take up the work.

"There have been many attempts to develop perpetual motion through the application of power on the rim of a wheel," said Mr. Tuch yesterday, "but heretofore always by applying weights, which had to be lifted by the wheel again. I apply electricity, and there is no weight to electricity. The machine will work, and when I demonstrate it the whole system of power transmission will be revolutionized."

In the old tannery building back in the lantana in Kalihi-kai down by the slaughter house, is a machine that will either revolutionize the whole world of power generating plants or turn out to be a crushing disappointment to Christian Tuch, the Honolulu inventor. The machine is the working model of the "power generating machine" he has been planning out theoretically for some years and for which he holds American, Canadian, British, French, and Belgian patents with the German patent applied for.

It is the machine The Advertiser has referred to several times during the past year as a perpetual motion machine although the inventor strenuously objects to having attached to his discovery a name that has been so frequently associated with lunatics.

After a great deal of trouble brought about by lack of funds, Mr. Tuch has his machine set up and in running order. And it works!

It is a crude bit of machinery as it stands. Parts that are designed to be of cut steel are now of chiseled oak; other parts of the working model are bits of scrap machinery; pulleys and belts are homemade — but it works and, according to Mr. Tuch, comes up to his wildest expectations.

On Wednesday afternoon next, at two o'clock, the inventor invites the practical machinists of the city, the electrical experts and others interested to come and watch his machine work, try it out and either convince themselves that he has a wonderful discovery in a method of power generation or that he has fooled himself, wasted several years of his life and thrown away the earnings of a lifetime in working upon and patenting something that is not what he believes.

Mr. Tuch describes his discovery as the utilization of an old power in a new way. The machine, in short, is something whereby power applied becomes multiplied. He drives it by electricity conveyed through wires from the Hawaiian Electric plant and with it develops electricity in a dynamo driven by the machine, the electrical power developed being four times greater than that used.

To the average mechanic, to talk of a machine driving itself, is arrant nonsense, but Mr. Tuch claims that he has the ocular demonstration and will prove it to tho satisfaction of anyone on Wednesday afternoon.

For the demonstration, he invites anyone who knows machinery and power plants, while the electrical experts are invited to bring with them their testing apparatus to measure the electricity that goes into the driving of the machine and compare it with the electric fluid drawn off.

It is not altogether outside the bounds of reason to suppose that this modest Honolulu mechanician has what he believes he has. The fact that he is not wealthy and that his machine is a crude affair does not mean that it is simply the product of a crank's brain.

The Wright Brothers, whose principles are now in use on every machine that flies, were cranks, poor and looked down upon by neighbors, as they worked and whittled away in their little shop at Dayton, Ohio, but presidents and crowned monarchs were proud to honor them after their machines had actually flown.

Stevenson was a crank, Bell was a crank, Edison was the worst crank of all, but if Tuch has what he says he will show to the experts of Honolulu on Wednesday afternoon next, his name will be greater in tho world than any of these.

His invention, he says, can be applied to anything that requires power. As an example of what he believes it will accomplish, he says:

"Place one of the power generators on a battleship, with storage batteries sufficient to start the machine and keep it running for two minutes, the machine will then run on its own power and will drive the battleship propellers until the engines wear out. There need not be a pound of fuel for boilers carried. The cruising radius of the ship will be unlimited and all the room now taken up in bunkers, all the time consumed in coaling ship, all the men required in the stokers' hold, all the money required to purchase coal and all the power now lost in transmitting the energy of the coal into driving power by steam will be saved."

This is just an example. His machine will drive irrigation pumps, will drive automobiles, will operate factories, will do anything, in short that is done now by any power, and at a minute fraction of the cost. The invention, if it is actually one, will scrap heap most of the machinery in the world.