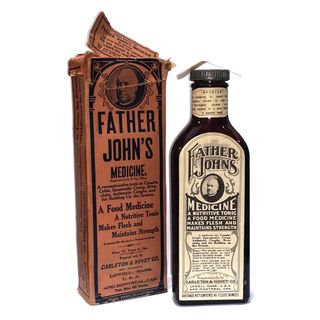 Carleton & Hovey Co. was a Lowell, Massachusetts-based pharmacy and patent medicine manufacturer, founded 1838 as a partnership by George H. Carleton (who established the original business in 1827) and his former apprentice Charles Hovey, apothecaries in Lowell, Massachusetts, a concern that Hovey continued to manage following Carleton's death in 1857, being joined by a new partner (also a graduated apprentice), Timothy G. Tweed, in 1865, who himself continued the business after Hovey's death in 1886, the pharmacy eventually passing into the hands of Aubert J. Fay, who incorporated the Carleton & Hovey Co. in 1902 (under the laws of New Jersey). The company is best known for producing Father John's Medicine, a cod liver oil tonic medicine, which, according to their advertising, it began doing in 1855, following a formula provided by Father John O'Brien, a local Catholic priest.

Based in Lowell, Massachusetts, the company was situated at three locations through its various stages of existence: