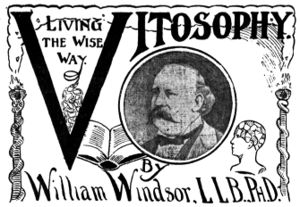 As seen in the Los Angeles Herald.

Vitosophy (portmanteau of the Latin vita, "life", and the Greek sophia, "wisdom": or "The Wisdom of Life", "The Wise Way of Living") is a medico-philosophical school and system of self-improvement, devised and promoted by William Windsor (and his Boston College of Vitosophy) beginning in the late nineteenth century, based heavily on phrenology and general understandings of human genetics (including eugenics) of the period. According to their own copy, Vitosophy is "a scientific system of Character Study and Delineation, a new system of Drugless Healing of all diseases, not surgical, and a complete system of Personal Culture ac­cording to standards of exact knowledge of character."[1] Among other principles, the system teaches that there are seven temperaments — Electric, Magnetic, Alkali, Acid, Vital, Motive, and Mental — governing life, and one must abide dietary and lifestyle regimes compatible with these temperaments.