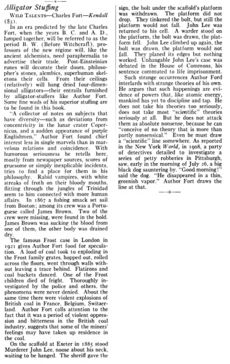 In an era predicted by the late Charles Fort, when the years B.C. and A.D. lumped together, will be referred to as the period B.W. (Before Witchcraft), professors of the new regime will, like the ancient alchemists, need paraphernalia to advertise their trade. Post-Einsteinian runes will decorate their doors, philosopher's stones, alembics, superhuman skeletons their cells. From their ceilings (relatively) will hang dried four-dimensional alligators — their entrails furnished by alligator-stuffers like Author Fort. Some fine wads of his superior stuffing are to be found in this book.

"A collector of notes on subjects that have diversity — such as deviations from concentricity in the lunar crater Copernicus, and a sudden appearance of purple Englishmen." Author Fort found chief interest less in single marvels than in marvelous relations and coincidence. With humour seriousness he retells here, mostly from newspaper sources, scores of gruesome and simple inexplicable incidents, tries to find a place from them in his philosophy. Rabid vampires, with white streaks of froth on their bloody mouths, flitting through the jungles of Trinidad seem to him connected with more human affairs. In 1867 a fishing smack set sail from Boston; among its crew was a Portuguese called James Brown. Two of the crew were missing, were found in the hold. James Brown was sucking the blood from one of them, the other body was drained dry.

The famous Frost case in London in 1921 gives Author Fort food for speculation. A load of coal took to exploding in the Frost family grates, hopped out, rolled across the floors, went through walls without leaving a trace behind. Flatirons and coal buckets dances. One of the Frost children died of fright. Thoroughly investigated by the police and others, the phenomena were never denied. About the same time there were violent explosions of British coal in France, Belgium, Switzerland. Author Fort calls attention to the fact that it was a period of violent oppression and bitterness in the British coal industry, suggests that some of the miners' feelings may have taken up residence in the coal.

Such strange occurrences Author Fort interlards with strange theories of his own. He argues that such happenings are evidence of powers that, like atomic energy, mankind hasyet to discipline and tap. He does not take his theories too seriously, does not take most "scientific" theories seriously at all. But he does not attack them as absolute nonsense, because he can "conceive of no theory that is more than partly nonsensical." Even he must draw a "scientific" line somewhere. As reported in the New York World, in 1909, a party of detectives detailed to investigate a series of petty robberies in Pittsburgh, saw, early in the morning of July 26, a big black dog sauntering by. "Good morning!" said the dog. "He disappeared in a thin, greenish vapor." Author Fort draws the line at that.