Lo! is a non-fiction book by American author Charles Fort, first published in 1931 by Claude Kendall. 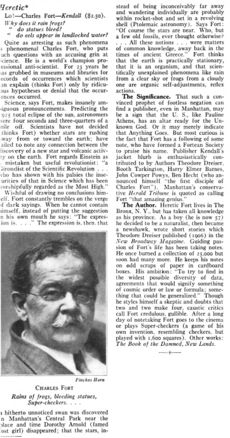 Why does it rain frogs?
"   do statues bleed?
"   do eels appear in landlocked water?

Quite as arresting as such phenomena is phenomenal Charles Fort, who puts such questions with an accusing grin at science. He is a world's champion professional anti-scientist. For 23 years he has grubbed in museums and libraries for records of occurrences which scientists can explain (thinks Fort) only by ridiculous hypotheses or denial that the occurrences occurred.

Science, says Fort, makes insanely ambiguous pronouncements. Predicting the 1925 total eclipse of the sun, astronomers were four seconds and three-quarters of a mile off. Scientists have not decided (thinks Fort) whether stars are rushing away from or toward the earth; have failed to note any connection between the discovery of a new star and volcanic activity on the earth. Fort regards Einstein as a mistaken but useful revolutionist: "a Girondist of the Scientific Revolution . . . who has shown with his palsies the insecurities of that in Science which has been worshipfully regarded as the Most High."

Wishful of drawing no conclusions himself, Fort constantly trembles on the verge of dark sayings. When he cannot contain himself, instead of putting the suggestion in his own mouth he says: "The expression is . . ." The expression is, then, that a hitherto unnoticed swan was discovered in Manhattan's Central Park near the place and time Dorothy Arnold (famed lost girl) disappeared; that the stars, instead of being inconceivably far away and wandering individually, are probably within rocket-shot and set in a revolving shell (Ptolemaic astronomy). Says Fort: "Of course the stars are near. Who, but a few old fossils, ever thought otherwise? . . . All these notions . . . were matters of common knowledge, away back in the times of ancient Greece." Fort thinks that the earth is practically stationary, that it is an organism, and that scientifically unexplained phenomena like rain from a clear sky or frogs from a cloudy one are organic self-adjustments, reflex actions.

The Significance. That such a convinced prophet of footless negation can find a publisher, even in Manhattan, may-be a sign that the U. S., like Pauline Athens, has an altar ready for the Unknown God. Or it may merely indicate that Anything Goes. But most curious is the fact that Fort has a following of some note, who have formed a Fortean Society to praise his name. Publisher Kendall's jacket blurb is enthusiastically contributed to by Authors Theodore Dreiser, Booth Tarkington, Harry Elmer Barnes, John Cowper Powys, Ben Hecht (who announced himself "the first disciple of Charles Fort"). Manhattan's conservative Herald Tribune is quoted as calling Fort "that amazing genius."

The Author. Heretic Fort lives in The Bronx, N. Y., but has taken all knowledge as his province. As a boy (he is now 57) he decided to be a naturalist, then became a newshawk, wrote short stories which Theodore Dreiser published (1906) in the New Broadway Magazine. Guiding passion of Fort's life has been taking notes. He once burned a collection of 25,000 but soon had many more. He keeps his notes on odd scraps of paper in cardboard boxes. His ambition: "To try to find in the widest possible diversity of data, agreements that would signify something of cosmic order or law or formula; some-thing that could be generalized." Though he styles himself a skeptic and doubts that two and two make four, caustic critics call Fort credulous, gullible. After a long day of notetaking Fort goes to the cinema or plays Super-checkers (a game of his own invention, resembling checkers, but played with 1,600 squares). Other works: The Book of the Damned, New Lands.