(Redirected from Order of Chylena and Ethiopia) 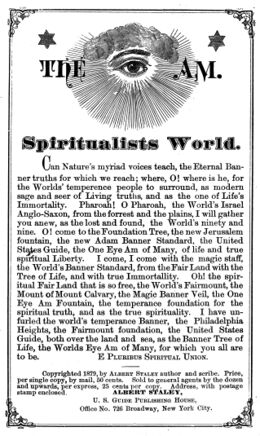 The Order of Chylena was a religious society supposed to have been organised by Albert Staley at Philadephia, Pennsylvania in 1879,[1] but it is unclear that the order existed or sustained any membership other than Staley himself. The purpose of the order would have been the teaching a "Star Spangled Banner Philosophy of Universal Life," as outlined by Staley in The Standard United States Guide (1879), an essay he stated was received in the Spiritualist manner from Chylena, "the new name for Ozoone hygean Jesus," and which contains a hodge-podge of Biblical and esoteric symbolism framed around the United States flag (particularly the 37 starred version) and national motto "E Pluribus Unum," borrowing concepts from phrenology, metallurgy (particularly gold assaying), chemistry, and alchemy, as well as hinting to Rosicrucianism and Freemasonry.