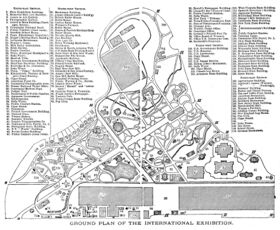 "Ground Plan of the International Exhibition" (1876)

The International Exhibition of Arts, Manufactures, and Products of the Soil and Mine, or simply the Centennial International Exhibition of 1876, was a World's Fair held at Fairmount Park along the Schuylkill River in Philadelphia, Pennsylvania from 10 May through 10 November 1876, the event based around celebrations of the 100th anniversary of the signing of the United States Declaration of Independence. It was the first official World's Fair to be hosted in the United States, and featured exhibitions sponsored by 26 of the 37 American states and several other countries alongside private industry and showcases of modern technology, including the Bell telephone and the first mass-produced typewriters.