The American Black Chamber is a non-fiction book by cryptographer Herbert O. Yardley, first published in 1931 by the Bobbs-Merrill Company, which details Yardley's founding and management of the United States Army's MI-8 Cryptographic Bureau during the First World War, and its continuation as a decade-long (1919-1929), peace-time joint United States Army and State Department civilian program of cryptanalysis referred to as the Black Chamber or the Cipher Bureau. 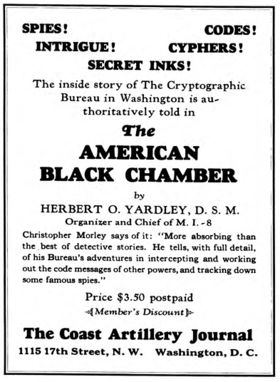 A book you will enjoy. The achievements of the Cryptographic Section of the Military Intelligence Division of the War Department General Staff during the World War are told in a most interesting and absorbing way in Major Yardley's book.

It will come as a distinct shock to Americans to learn that the most secret and confidential code cablegrams and messages of the United States were easily decoded and probably read by our Allies as well as by enemy and neutral countries. False security is the dangerous state in which we lived. Thousands of lives were needlessly sacrificed through the breakdown of our combat codes; and, conversely, thousands of lives were saved through the ability of our cryptographers to break down speedily the constantly changing codes of our enemies.

We can't all be cryptographers, but we can and should know enough of the subject to realize the power of a skilled cryptographer to understand our most secret radio, cable, and wire communications.

In diplomacy as well as in warfare the cryptographer plays a major role — defensively as well as offensively. The nation that can maintain secrecy for its communications and read the cablegrams and radiograms of other nations is often in a position to gain its legitimate ends without being forced to go to war. The ethics of the case may be debatable, but Stephen Decatur's memorable words persist in recurring to this reviewer.

Aside from the purely military lessons to be learned from The American Black Chamber, the book is heartily recommended to the average reader for its illuminating discussions of secret inks, analytical solution of codes and cyphers, the workings of MI-8, the operations of foreign powers in cryptography, the intrigue and espionage incident to the war, and the vital part played by the cryptanalysis during the Peace Conference and the Washington Disarmament Conference as well as during the World War.

The book is more interesting and intriguing than a first class detective story, for it possesses not only the dramatic suspense of such stories, but it bears the unquestionable stamp of absolute authenticity. It is recommended to our readers as an outstanding work of military and national interest. If you love mystery, intrigue, dramatic suspense; if you enjoy a peek — many peeks — behind the scenes, The American Black Chamber will more than satisfy you.