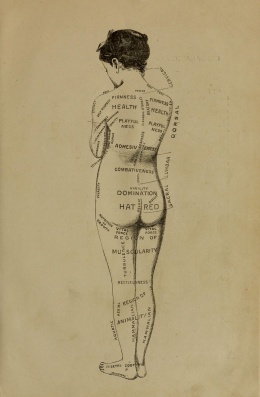 Sarcognomic chart of body from rear 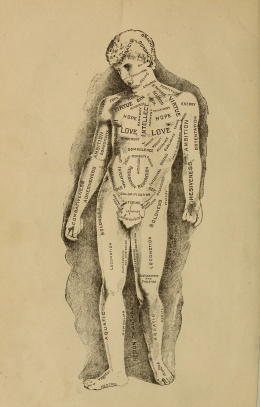 Sarcognomic chart of body from front

Sarcognomy (from Greek: σάρξ, sarco, "flesh" + gnomy, "opinion, knowledge"; "knowledge of the flesh") is a hypothesis that purports to explain the relationship between the soul, held as the origin of human faculties, and the brain, the seat of such faculties (consciousness), and the body, through its connection with the brain (nervous system). According to its founder, Joseph Rodes Buchanan, it is "a knowledge of the physiological and psychological powers which belong to each part of the body in health, in excitement, and in disease, and consequently an understanding of the correlation of soul, brain and body."[1]

It is often read as an expansion of Franz Joseph Gall's basic principles of phrenology to encompass the whole body.

This wonderful discovery, made in 1842, has been verified in innumerable experiments since by myself and my pupils, and, being a law of nature, is verified in every disease. But its easy verification by simple experiments, and its universal presence as the law of life in disease, have not led to its discovery or even the suspicion of its existence- Its demonstration is so easy and convincing that the science will be universally recognized as the most important addition ever made to biology, as soon as the attention of the educated is seriously given to the investigation ; for all competent and candid observers will easily find what I have found, and what all my pupils readily discover in others or in themselves.

In these engravings, designed not for psychic philosophy, but for the guidance of therapeutic treatment, I have not thought it necessary to make minute psychic divisions. Heroism, for example, is not separated from Firmness, nor Approbativeness from Health, nor any sub-division introduced between Adhesiveness and Combativeness.

The reader should understand that each portion of the surface of the body is related directly to a physiological function, and only indirectly to a psychic function, through its sympathetic connection with the psychic organ, the brain. When the nervous system is very active and sensitive, the psychic effects are conspicuous; but when the opposite condition exists, there is far less of psychic effect from any operation on the body.

To appreciate Sarcognomy justly this entire volume must be perused, for a science cannot be satisfactorily represented by a map, nor is this volume a perfect and complete exposition of the subject; its chief purpose is to guide those who wish to reduce its principles to practice. Many things have been omitted which would have been introduced in a more extensive volume, and I would mention one important omission as to the location just behind Sanity, marked as Dignity in the posterior view, which is of much value as a tonic to the mind and nervous system, reinforcing the will-power, mental and physical inspiration, and independence of character.