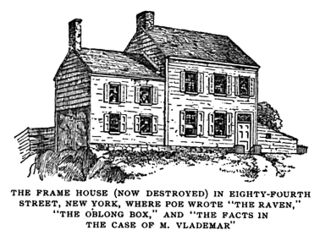 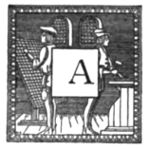 CURIOUS and half forgotten chapter in the life of Edgar Allan Poe is that which deals with his researches in the field of "Secret Writing," and his extraordinary ability in inventing and analysing ciphers.

In "The Gold Bug" he gave a singularly clear description of the method of translating a cipher message. At first sight the cipher in the story, with its mingling of letters, figures and symbols, appears bafflingly formidable; but after Poe has started the scent by pointing out that which should have been at once perfectly obvious, one is ready and eager to carry out the reading of the message for himself. But Poe was not merely able to invent and analyse systems of secret writing; he stood ready, to decipher those which others would submit to him. He even went so far as to assert, in a Philadelphia weekly paper on which he was employed, that no cipher could be sent to him that he would not be able to resolve. This challenge excited a lively interest among the readers of the paper, and letters were sent to him from all parts of the country. In many cases the writers were not strictly scrupulous in observing the conditions of the challenge. Foreign languages were used. Words and sentences were run together without interval. Several alphabets were employed in the same cipher. And yet out of, perhaps, one hundred ciphers received there was but one which Poe did not succeed immediately in solving, and that one was proved to be an imposition, a jargon of random characters having no meaning whatever.

But by the public at large, Poe's feat was looked upon in the light of a gigantic humbug. Some averred that the mysterious characters were inserted for the purpose of giving an odd look and thereby advertising the paper. Others fancied that Poe not only solved the ciphers, but put them together for solution. In fact, very few, with the exception of those who had written the ciphers, really believed in the authenticity of the answers. And it was with the hope of dispelling these ideas of deception that Poe afterward wrote his papers on "Secret Writing" in the pages of Graham's Magazine. The first method of cryptography which Poe attacked and riddled was that of the scytalæ of the Spartans, long considered impossible of solution. The scytalæ were two wooden cylinders, precisely similar in all respects. The general of an army, starting on an expedition, received one of these cylinders, while the other remained in Sparta. To communicate, a narrow strip of parchment was so wrapped round the scytala that the edges of the skin fitted accurately each to each. The writing was then inscribed longitudinally, and the letter unrolled and dispatched. The general addressed had only to wrap the second cylinder in the strip to read the message. But as Poe pointed out, certain solution was easy enough. The strip intercepted, let there be prepared a cone of great length. Let the strip be rolled on the cone near the base, edge to edge; then still keeping edge to edge, and holding the parchment close to the cone, let it be slipped gradually toward the apex. In this way some of the letters whose connection is intended will come together at that point of the cone where its diameter equals that of the scytala on which the cipher was written; a similar cylinder can be obtained and the message read.

A very common and somewhat too obvious mode of secret correspondence is the following. A card is interspersed, at irregular intervals, with oblong spaces, about the length of ordinary words of three syllables in a bourgeois type. Another card is made exactly coinciding. One is in possession of each party. When a letter is to be written, the key-card is placed upon the paper and words conveying the true meaning inscribed in the spaces. The card is then removed and the blanks filled up, so as to make out a signification different from the real one. When the person addressed receives the cipher, he has merely to apply to it his own card, when the superfluous words are concealed, and the significant ones alone appear. The chief objection to this cryptograph is the difficulty of so filling the blanks as not to give a forced appearance to the sentences. Differences, also, in the hand writing between the words written in the spaces, and those inscribed upon removal of the card, will always be detected by a close observer. A pack, of cards is sometimes made the vehicle of a cipher, in this manner. The parties determine, in the first place, upon certain arrangements of the pack. For example: it is agreed that, when a writing is to be commenced, a natural sequence of the spots shall be made; with spades at top, hearts next, diamonds next, and clubs last. This order being obtained, the writer proceeds to inscribe upon the top card the first letter of his epistle, upon the next the second, upon the next the third, and so on until the pack is exhausted, when, of course, he will have written fifty-two letters. He now shuffles the pack according to a preconcerted plan. For example: he takes three cards from the bottom and places them at top, then one from top, placing it at bottom, and so on, for a given number of times. This done, he again inscribes fifty-two characters as before, proceeding thus until his epistle is written. The pack being received by the correspondent, he has only to place the cards in the order agreed upon for commencement, to read, letter by letter, the first fifty-two characters as intended. He has then only to shuffle in the manner prearranged for the second perusal, to decipher the series of the next fifty-two letters — and so on to the end. The objection to this cryptograph lies in the nature of the missive. A pack of cards, sent from one party to another, would scarcely fail to excite suspicion, and it cannot be doubted that it is far better to secure ciphers from being considered as such, than to waste time in attempts at rendering them scrutiny-proof when intercepted. Experience shows that the most cunningly constructed cryptograph, if suspected, can and will be unriddled.

One of the principal means of devising a cipher, as Poe pointed out, is to take as the key some phrase or name or title containing just the number of letters of the alphabet, and then for "a" to use the first letter of the phrase, for "b" the second, for "e" the fifth, etc. But the cryptograms in which Poe most delighted were not of this simple nature, and in his second challenge to readers, through the pages of Graham's Magazine, he invited ciphers of which the key-phrase might be in English, French, Italian, Spanish, German, Latin, or Greek, or in any of the dialects of these languages. Although there were but few responses to this challenge, the complex and intricate nature of these responses, and the swift and unerring manner in which Poe solved them, served to bear out in no doubtful way Poe's contention that undecipherable cryptogram had never yet been found.

Bibliography of Cryptography: a Catalog of Books Pertaining to the Science of Codes And Cyphers. (Cincinnati, 1938)