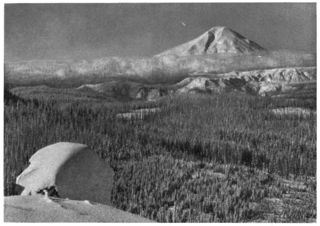 Mountain Devils of Mount St. Helens is a press label for a group of crypto-hominids, "mountain gorillas," or otherwise unknown entities that were reported to have attacked a prospecting party - including Fred Beck, Roy Smith, and others - in early July 1924. According to news articles on the alleged incident, the creatures, in some tallies numbering thirty, hurled stones and attacked the group's cabin at a gorge on the southeast shoulder of Mount St. Helens, some eight miles from Spirit Lake. The prospectors reported that they fought back using rifles, allegedly killing one and wounding others, before fleeing after several days; however, no remains were found when forest rangers returned to the scene.

Related articles from Native American contributors, including Jorg Totsgi of the Klallam (Clallam) Tribe, linked to incident to the activities of the Seeahtik, "strange giant Indians" with "hairy bodies like a bear," possessing knowledge of bird imitation, ventriloquism, and hypnotic suggestion.[T]

The area where the incident was said to have taken place was later named Ape Canyon.