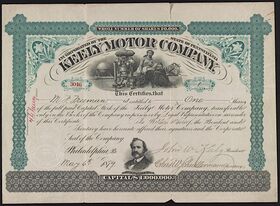 Stock certificate for one share of the Keely Motor Company, made out to M.F. Freeman, printed by National Bank Note Co., c. 1879.

Keely Motor Company was a Philadelphia, Pennsylvania-based corporation, chartered in 1874 as a holding company for the inventions of John W. Keely, both patented and unpatented, in particular for his various perpetual motion machines. The company continued operations after Keely's death in 1898, even briefly employing one T. B. Kinraide to try to figure out Keely's machines, but eventually shuttered in the early years of the twentieth century.