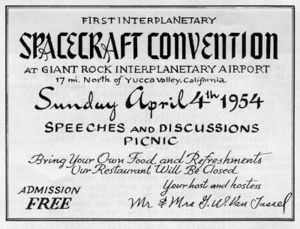 Your invitation to the convention.

The Interplanetary Spacecraft Convention was an annual flying saucer and Ufology conference, hosted from 1954 to 1978 by George Van Tassel at Giant Rock, near Landers in the Mojave Desert of California. The event's promise of an open forum for claims about curious contacts from space attracted a number of the early Space Brothers devotees, including Daniel Fry, Howard Menger, Orfeo Angelluci, Truman Bethurum, Dana Howard, and Gabriel Green, and even inspired one contactee, Wayne Sulo Aho, who claimed to have been contacted while attending the 1957 convention.