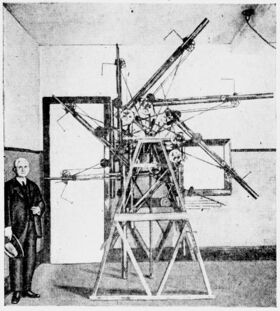 "Pictured on this page is a machine invented by Charles J. Wolfe, of Minneapolis, which, he claims, is the nearest approach to perpetual motion that has yet been devised. This apparatus is operated entirely by a system of balances, consisting of tubes filled with mercury and is controlled by a hand lever. Mr. Wolfe says that his machine was suggested by the sight of a stalled Ferris wheel at the Columbian Exposition in Chicago thirty-six years ago, and that it took all the years since to perfect it." ("Science Explains Why 'Perpetual Motion' Is Impossible", New Britain Herald of 10 Aug. 1929)

Charles J. Wolfe (May 23, 1865 - February 23, 1954) was an American inventor inspired by the sight of a stalled Ferris wheel at the 1893 World's Fair to create what the press reported in 1926 was a perpetual motion machine (though Wolfe stated that since it could be started and stopped by a lever that it was not truly perpetual).[A] The Wolfe Automatic Power Machine was described as a gravity-powered wheel with eight projecting arms, these arms having long cylinders filled with mercury attached, operating such that when the wheel is rotating, half the cylinders are perpendicular and the other half descend.