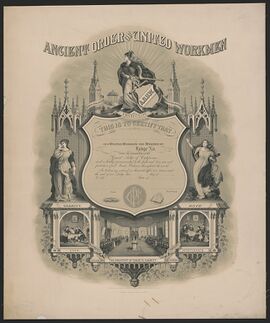 The Ancient Order of United Workmen (A.O.U.W.) was a North American fraternal benefit society, formed by John Jordan Upchurch and other members of his local League of Friendship of the Supreme Mechanical Order of the Sun in 1868 at Meadville, Pennsylvania. Its main practical purpose was the offering of health and life insurance policies to members who were largely drawn from the white working class, and its ritual and symbolism borrowed heavily from Freemasonry, substituting masonry in particular with a more general vocabulary of worker.

See our page on Lodges of the A.O.U.W. for index of local Lodges

The United Workmen were organised into local Lodges, these presided over by a Master Workman and their officers, each lodge existing under the jurisdiction of the Grand Lodge on the state or provincial level (or the directly under the Supreme Lodge where no Grand Senate existed).

Degree of Honor (D. of H.) lodges were organised as a women's auxiliary, "intended to promote union, sympathy and friendship among the wives, daughters, mothers, and sisters of members of the Order."[1] The D. of H. lodges would eventually form their own Superior Lodge in 1896, and by 1910 became an independent organisation, the Degree of Honor Protective Association.

In addition to the main set of four (later reduced to three) degrees within the A.O.U.W. ritual, members could further opt to take an endowment rank, the Grand Legion of Select Knights, for extended insurance. A side degree known as the Ancient Order of Adhesive Mogullians, intended to "furnish amusement as well as substantial benefits"[2] (and likely mainly the former), was likewise instituted by certain humour-minded members.