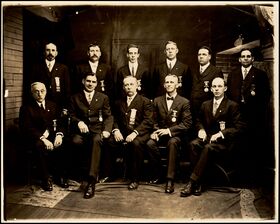 Lodges of the Ancient Order of United Workmen were the local chapters of the order, equivalent to Masonic Lodges, operating under the jurisdiction of Grand Lodges, which, in turn, existed as subordinates of the Supreme Lodge (until the Supreme Lodge was abolished in later years).

Each lodge of the A.O.U.W. was led by a Master Workman, alongside their officers, including the Financier, Treasurer, Recorder, Foreman, Overseer, Guide, Inside and Outside Watchman. These were elected positions, and all were directly involved in the United Workmen initiation ritual and other matters at the local lodge level.

Lodges in the United States

(As there were over three thousand lodges across the United States, this list does not represent more than a small fraction of the total. Those with the abbreviation "D.H." appended were Degree of Honor lodges.)