Van Meter Visitor is a recent appellation for a nocturnal "winged monster" that was reported to have been sighted by multiple persons in and around the town of Van Meter in Dallas County, Iowa during the autumn of 1903. Press reports at the time described the entity as having "great bat-like wings" and a "blunt, horn-like protuberance" that radiated a "dazzling light" in addition to possessing a "stupefying odor" of marked unpleasantness. The entity, accompanied by a smaller mate or offspring, was claimed to have been witnessed exiting and entering an abandoned coal mine by a number of the town's residents, who had, it was reported, set up an overnight vigil at some point in early October 1903. 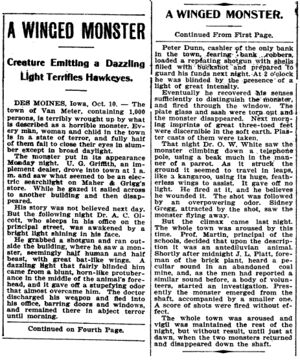