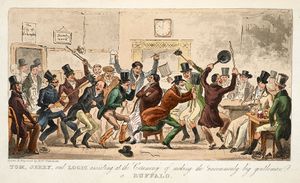 A comic portrayal of the Buffalo initiation rite (by R. Cruikshank, 1871, for Pierce Egan's "Finish to the Adventures of Tom, Jerry, and Logic")

The Royal Antediluvian Order of Buffaloes (R.A.O.B.) is an English fraternal order, generally believed to have been founded by Joseph Lisle, William Sinnett, and others involved with the theatre at London, England in 1822, though it has also been claimed that Buffaloism was founded by George Cooper Murray in the late 18th century.[1] In the former case, the name said to be inspired by a then-popular ballad "We'll Chase the Buffalo,"[2] with an initiation rite veering into the realm of the burlesque; in the latter, the origins of the Buffalo name is attributed to a mistranslation of Harpocrates (the founding lodge) as "son of the bull or buffalo."[1]

The modern ROAB is organised into local Minor Lodges, these under the leadership of the Worthy Primo and their officers, the City Marshall, City Secretary, City Treasurer, City Chamberlain, City Tyler, City Constable, City Registrar, City Minstrel, City Waiter, Alderman of Benevolence, and Trustees; and these local Lodges are under the jurisdiction of Provincial Grand Lodges, and, ultimately, the Grand Lodge.

In the ritual work of the order, an individual Buff moves through four degrees: Brother (Kangaroo); Certified Primo; Knight of Order of Merit (Knight Sir); and Roll of Honour (Right Honourable).

Foundation of the Buffaloes