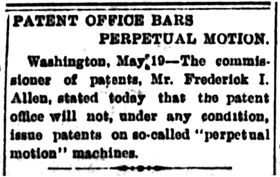 Coverage of Perpetual Motion as it relates to patents issued and patents claimed, as well as the generally negative feeling of the patent office toward free energy applications.