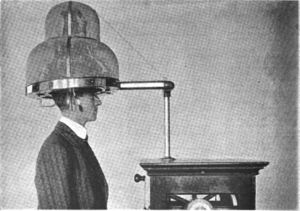 Man, standing, with a Lavery Electric Phrenometer on his head.

The Lavery Electric Phrenometer is an automated phrenological measuring device, invented and patented by Henry C. Lavery, which was the basis for the more well-known Psycograph of later decades. The device operates by automatically taking measurements of several areas of the subject's head and producing a print-out record of the readings taken, specifically functioning as a "phrenometer for measuring the faculties of intelligence of the head, and hence determining the size and character of the brain contained therein."