If one tracks an inconsistent record, L.W. de Laurence was likely born in rural Ohio to parents William de Laurence and Mary Walker in 1868 or 1869, their first-born son and twin brother to sister Lora.[3] In November 1897, de Laurence married Orrie Eckert at Hamilton, Ohio, dubiously reporting himself to be of age;[4] it is unclear how long this marriage lasted. He remarried in around 1905, taking a teenaged native of Kentucky, Pauline McAdoo, as his second wife.[5]

Prior to his storied career as a publisher, de Laurence was a lecturer on - and demonstrator of - mesmerism and hypnotism, operating from Chicago and Pittsburgh during the early 1900s as the De Laurence Institute of Hypnotism and Occult Philosophy (or Suggestive Therapeutics).[6] During this period he boasted to being an A.M., Ph.D., LL.D., and instructor of hypnotism, psychology, and related studies at the American School of Psychology;[7] in addition to being a "student of the Orient in Practical Psychology, Metaphysical, Alchemy, Cabala, Occult and Natural Philosophy," and the credited author of "Medical Hypnosis," "Practical Lessons in Hypnotism and Magnetism," and "The Bible Defended" (all published by Frederick J. Drake & Co., whose principal offices were 352-356 Dearborn St., Chicago).[8] 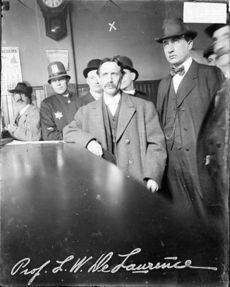 The White Willow and the Black Rose

On 12 November 1912, Chicago police raided de Laurence's temple at 3340 Michigan Ave., arresting de Laurence, his wife Pauline, and others present, based on witness testimony provided by Augusta Muerie. Newspaper reporting on the raid and subsequent trial focused attention to the claim that most male members were "Negroes or Indians" and female members were "white women",[9][10] and that the cult was engaged in lurid activities, including public nudity, self-flagellation, and forays into the dark arts.[11] Further, it was reported that the "chief deity of the temple was found to be a regular cigar store Indian,"[12] which was the focus of the devotions and meditations.

For her part, Muerie specifically alleged that de Laurence had "ruled through the power of hypnotism," that he "practiced black magic and dressed in fantastic clothes," and would "throw himself into a trance and do strange dances of the Orient," sometimes "hypnoti[sing] members of the cult" to do the same; and, further, that he would use his wife or an office assistant named Sadie Pyle as mediums for "strange messages and advice from the spirit world."[13]

Post office inspectors used evidence seized during the raid to bring up charges against de Laurence, who they accused of sending drugs and immoral literature through the mail. De Laurence was ultimately fined $15 in municipal court, and the temple was effectively disbanded.[14]

"The Old and New Knowledge"

Although noted and outed as a grand plagiarist, de Laurence's texts are nonetheless of interest and merit to this day to students of the Art.