By his own accounting, Stanhope spent some years as a railroad labourer, working the yards in an effort to scratch together the funds required to fulfill his dream of earning a medical degree from the Homeopathic Medical College of Missouri at St. Louis, even going so far as to mortgage his home. After a few fits and starts, including a brief return to the railyard, he accomplished this in March 1887, and set to work in the medical trade, eventually expanding his operations to include pharmacy (1890) and dentistry (1896).[2]

It was at this point in his career that Dr. Stanhope was inspired - likely by the success of the area Weltmer Institute of Suggestive Therapeutics - to the study of Magnetic Healing, finding himself a natural fit for the practice, having "possessed extraordinary powers in this direction" since childhood.[2] So it was that, in 1897, Dr. Stanhope determined to open a sanitarium, leasing a mansion at the corner of Elm and Cherry for his purpose: and thus was the Stanhope Sanitarium and School of Magnetic Healing born.[2][5]

There was great early success for Stanhope and his fellow students of the Science of Magnetic Healing, for a time; but it was not to last, as he and his fellow practitioners reportedly aroused the condemnation of local Christian ministers, who affected boycotts and caused a sharp decline in area practices.[6]

Stanhope continued to reside in Nevada, Missouri until late in his life,[7] when he came into the care of the Independent Order of Odd Fellows Home Hospital in Liberty, Missouri,[8] where he passed away on April 24, 1941.[3] 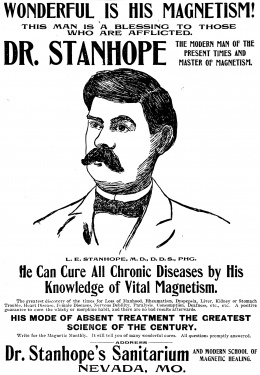 "A Blessing To Those Who Are Afflicted"